Wheelie Wednesday and What a Weekend With Motogp

What a fabulous start to Motogp! 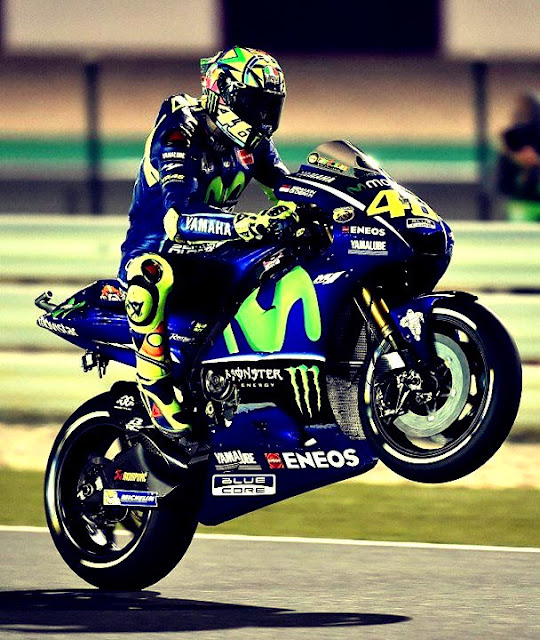 Well, what a race, after a very slow start due to conditions the wait was well worth it wasn't it folk. 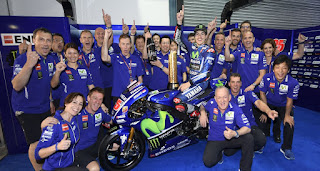 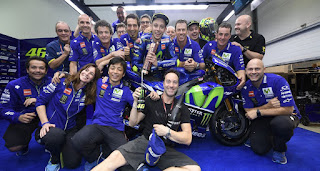 And Rossi, competitive and calculated as usual. 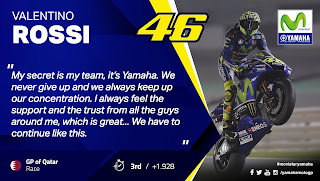 Very true that teamwork gains the best results especially in the case of Yamaha! 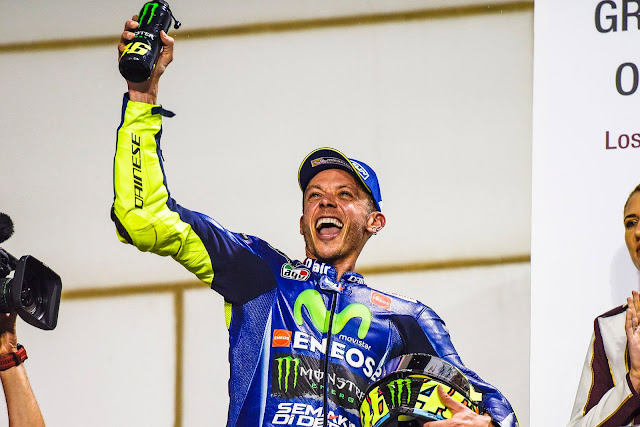 Lovely to see Rossi beaming with satisfaction it's as if he's saying to all those who thought he had reached his limit take that you lot! 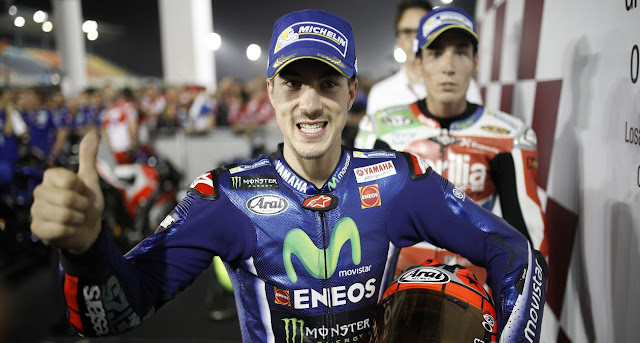 And Vinales too, he looks so determined and raced with determination. 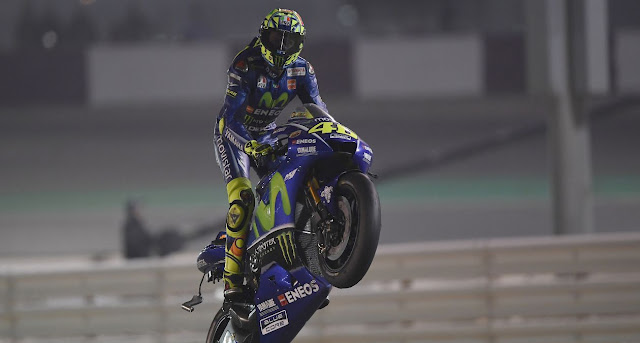 Now, who was it who knocked Rossi's camera off the back, when I watched the highlights on Channel 5 I couldn't quite make out who it was? 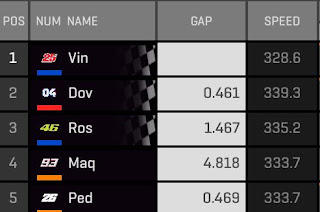 Here we have the standings from the first race at Qatar, great to see Vinales and Rossi right up there. Well done to Dovi too. 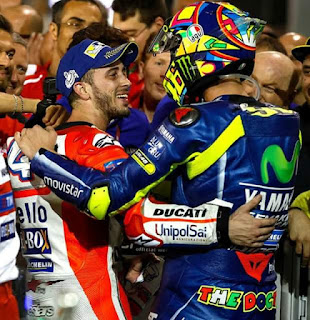 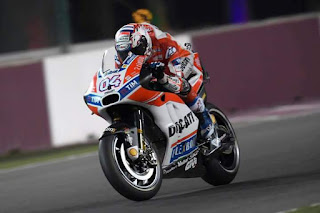 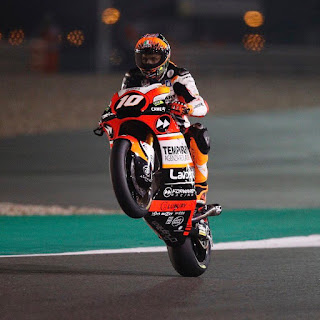 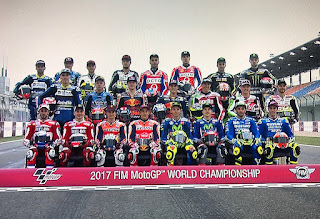 What a great bunch of guys all raring to go with hunger in their blood to win that title.

Round up of some of the quotes this week I've found on the web:-

Vinales - 'I feel incredible and it shows in the results. We did a great a job during the whole weekend and we started good in the test, then in FP1 we were already feeling really good. The race was difficult, it started to rain and there was a bit of confusion because we didn't know what to do. The first laps were very challenging, the track was so slippery and I wanted to take it easy and stay calm. I knew I had good pace, so I tried to push at the very end of the race. There were many crashes at the front, so I waited for the right moment and finally we took the victory'. Quote motorcyclenews

Rossi - 'Starting the season with a podium is always great, better than last year'. 'I have to say a great thank you to Yamaha and all my team because in all this period I always felt a great support and trust in me'. Quote Autosport

Dovizioso - 'I'm very pleased with the result and the job we did this weekend: it was difficult for everyone because of the conditions we encountered, but we calmly arrived at the race with a competitive set-up. We were even better at choosing the rear tire on the grid, changing strategy and switching to the soft tire. In the final part of the race I tried to hold back Maverick but I don't think that we could have done anything better today'. - Quote Cycle World

Iannone - 'I made a mistake'. 'Maybe this is a lesson for the future, I have to wait for a better situation to pass a slower rider and not be so impulsive'. Quote Motorcyclist

Zarco - 'We can say that (it was) a rookie mistake'. 'I just wanted to go, and I said that if you make the decision to go fast and push, you can find the limit. I accept what I choose'. - Quote Motorsport.com

Espargaro - 'For sure, this track for us was our weakest track' - Quote Autosport

Marquez - 'After the race, I think with a hard I was able to fight for the victory until the end But maybe I was also able to crash! Because the hard in the end gives less warnings, and maybe I put the hard, I'm more competitive, but I crash'. - Quote motormatters.com

Just some of the many comments made on line. Eww, it's gonna be an exciting season me thinks.... 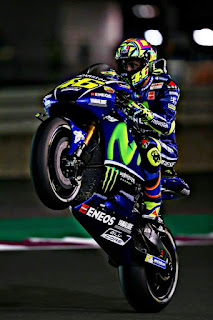 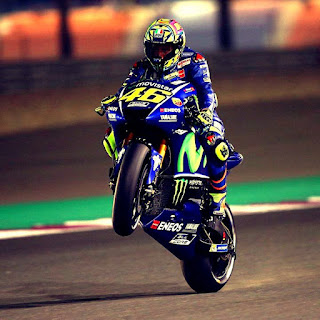 So, our weekend was great, went out for a rideout with hubby, first one this year, not to cold and I'm ready to start building up the time spent sat on the bike for our tour to Biarritz later on in the year to get my bottom prepared for lots of miles. 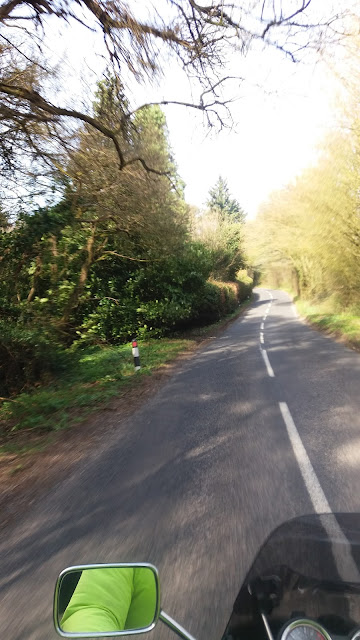 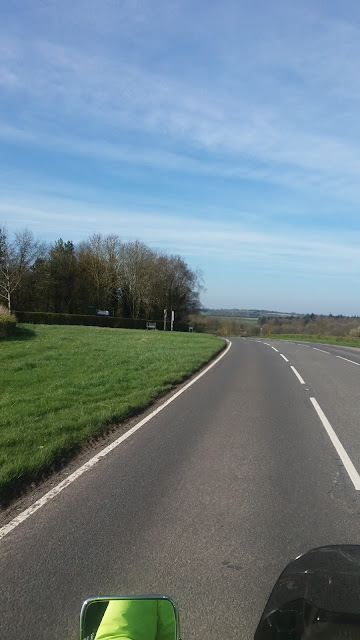 A272 Corhampton road, just has to be done for the first rideout of the year. 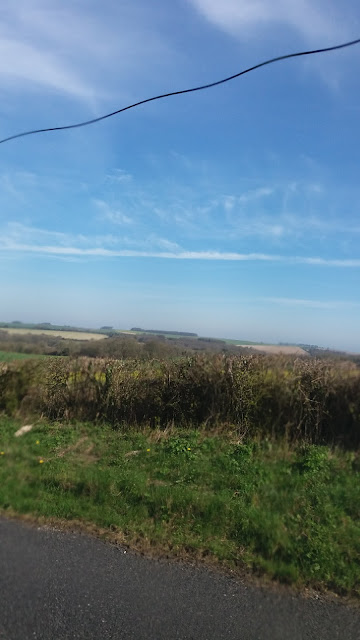 Anyone would think it was the middle of summer looking at that sky! 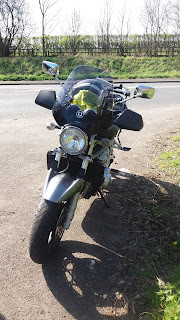 So, the first ride out with the Triumph club starts this weekend leaving from Lysses Car Park, Fareham for a 9am departure. We will be going to Old Sarum Airfield, Salisbury to view vintage aircraft flying and enjoying refreshments from the Skies cafe.

So, that's it from me for this week folks, great start to the new season of motorbiking, racing until later, ride safe...... 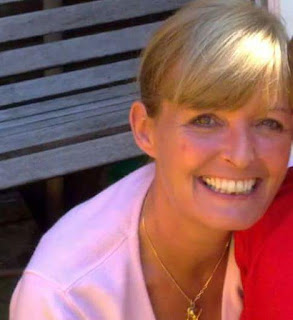 Motorbikesandme
Welcome to Motorbikes and me, a blog about riding motorcycles and touring. Including reviews on Motorcycle gear and products. Also discussing Motogp throughout the year.

Welcome to my new blog! Where you can Chinwagwithme about motorbikesandme!

How I arrived here I just do not know! Watch this space for more posts once I have got my head around the site. You can find out a little ...